Friends of Aery Faery Tangent
The sketch is by heritage specialist Stuart Stark suggesting how the schoolhouse may have looked in about 1888.  Today the schoolhouse has been faithfully restored by the Geric Construction Company as part of Duval Place development:

From 1865 until Dec 9, 2008 the schoolhouse remained a cherished public asset, at first as a school, and later as a Scout Hall and then stewarded by the Royal Oak Lions.  When the property, including the schoolhouse, was sold to the Geric Company in 2008, it was intended that the building be preserved.  However, residents expressed great sadness if the "heart of Royal Oak" might be lost from public access.

Beginning in Jan 2009 and for two years following, Mr. Ed Geric held numerous meetings to see if a way could be found to "rescue" the schoolhouse for public use.  Finally a deal was struck with the Crumsbys Cafe whereby the schoolhouse became Crumsbys Schoolhouse Cafe by day and then, when so arranged, a public meeting hall for evening "discussion cafes".  Other businesses joined the Gerics to help, with M6 Security contributing ceiling-mounted projector, drop-down screen and audio.

A Saanich News reporter, Brittany Lee, wrote a piece about the "rescued" schoolhouse (click here).  Soon there were evening meetings, as seen below discussing community gardens. 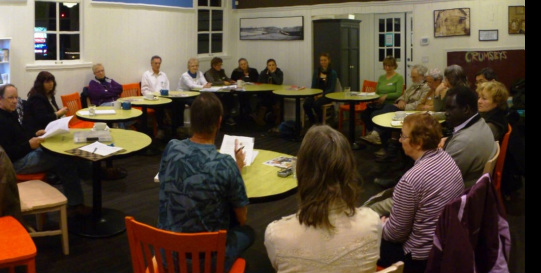 And, of course, the Schoolhouse hosts Friends of the Aery Faery Tangent every Saturday morning since Dec 22, 2012.  The address is 4525 W Saanich Rd.  Everyone welcome.